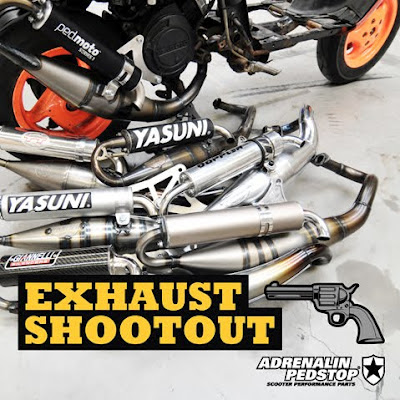 With a variety of exhaust systems on the market there’s more than enough to choose from with brands like Leo Vince, Polini, Doppler, Yasuni, Pedmoto, Metrakit, Tecnigas and many more. So which exhaust should you buy and what are the pros and cons of each system?

Before we get into it, it might be worth mentioning for the newbies who aren’t too savvy when it comes to transmission setup and how roller weights affect performance, that each exhaust system reaches its peak performance at a certain rpm. The rpm of an engine using an automatic transmission is generally set and maintained using roller weights. Why is this important? Most aftermarket systems (free flow exhausts) lack in torque and the ability to work at a lower rpm in comparison to the stock exhaust and rely on higher revs being maintained to reach that magical area where the peak power of the particular system can be found. The system with highest peak hp and with a transmission that’s set to its optimum will usually result in the broadest spread of power from acceleration to full speed. The key to any setup is to maintain the highest hp for as long as possible over the given speed range, it’s worth remembering that top speeds can differ marginally due to the rpm where peak power is seen. The higher the rpm the faster the engine components are turning which means more top speed although this difference will be minimal if the scooter in question is like our road mule Zip 50cc with standard gearing.

The goal with any purchase has to be getting exactly what you want, in most cases this is the most power from start to finish while taking into account how much money you have to spend and if a system is worth the extra cost. With this in mind we split the systems we tested into two groups – below £100 and above £100. All of the systems we tested are suitable for 50cc scooters with some of them working exceptionally well on 70cc cylinders which we’ll leave for the next shootout comparison.

The below £100 group consists of the Leo Vince TT, Giannelli Extra and Tecnigas Trek. We wanted to include the Yasuni Z in this group due to the performance similarities but with a SRP of £135 it had to move into the next group. The £100 and above group includes the Pedmoto Series 1, Yasuni Z, Yasuni R and Doppler S3R. All of these systems have a few things in common that make them a great improvement over the sub £100 pipes – brackets! “What? Brackets?” Each exhaust in the £100+ group makes use of a bracket hanger system that uses either rubber bungs to reduce vibration or, like the Pedmoto Series 1, a true silent block. As you’d expect the performance on these systems, apart from the Yasuni Z, is above the likes of the TT etc.

Our exhaust tests were conducted on our 50cc Piaggio Zip SP fitted with the following components; a 17.5mm carburettor, Polini Hi Speed variator, a standard drive belt, a Polini For Race adjustable clutch set to engage at around 5500 rpm and the standard air box. For each system that we tested time was spent making the appropriate fuelling and transmission adjustments but leaving the clutch and compression spring the same. So with these changes this still leaves some room for improvement in the setup for each of the systems.

The results...
Before looking at the dyno results and questioning why you may have seen a particular system perform either higher or lower on other dynos, you need to remember that each Dynometer will vary in the hp figure produced. The only thing that is relevant and accurate is the difference in hp between the components being tested on that day and on that particular machine! We hope that makes sense.

On our dyno we recorded the following results in power order: 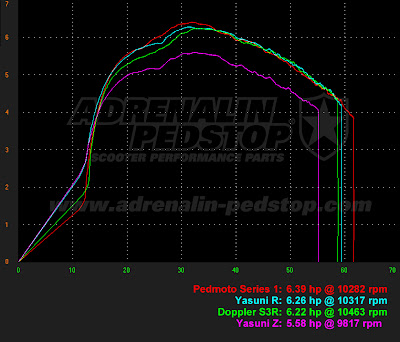 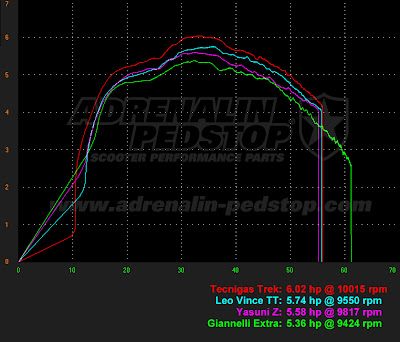 It isn’t surprising that the top three are almost identical in peak hp and the rpm where it’s reached. The Pedmoto Series 1 produced the highest peak power of 6.39hp and all three systems showed an almost identical power curve on the dyno. The potential for these systems to work equally as well on 70cc cylinder kits, especially with cylinders needing to operate at a higher rpm, far outweighs the below £100 opposition.

What’s surprising from the sub £100 group is how well the Tecnigas Trek performed over the likes of the Leo Vince TT and Giannelli Extra. Take a look at the difference between the Trek and Yasuni Z – the Z is outgunned by both the TT and the Trek with the Trek giving an additional .44 hp over Yasuni’s base model. What you’ll also notice is how low the rpm is in this group when peak power is reached in comparison to the likes of the Yasuni R and Pedmoto Series 1. This makes the Leo Vince TT and Giannelli Extra ideal for 50cc cylinders but not so good when you decide you want to upgrade to a 70cc bore kit.

So what should you make of the test results? Well on the sub £100 models the Trek is a clear winner. Although Tecnigas isn’t always the most popular brand it gave the highest peak hp and managed to hold it the longest over the speed test shown on the dyno. Each of the cheaper systems also showed a reasonable operating range for peak hp to be seen which makes “getting the weights right” that much easier when it comes to the transmission.

The above £100 systems were extremely close with the Pedmoto Series 1, Yasuni R and Doppler S3R showing almost identical power curves with the Pedmoto Series 1 pipping them both with the highest peak power of 6.39hp. The disappointment of this test has to be the Yasuni Z, we already know these systems are well made and look great but with a peak hp lower than the TT. If your purchase isn’t entirely down to budget then you would probably make the jump to one of the other exhausts. 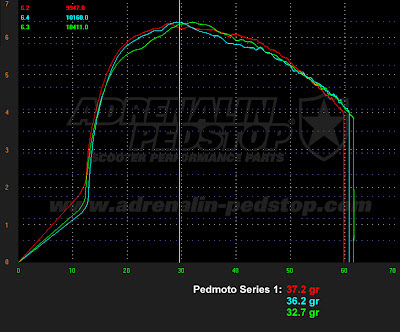 Out of all the £100+ systems we tested the Pedmoto Series 1 comes out the clear winner, not just because of price, build quality and performance, but due to the operating window the system is capable of working in. The dyno graph above shows three tests all on the same system on the same day within minutes of each other, the only difference between the dyno runs is the overall weight in the transmission; 32.7gr, 36.2gr, 37.2gr and what rpm the peak power was seen at. What you will notice is peak hp is almost the same be it with differences in the power curve although still similar even though the rpm varied from as low as 9,947 up to 10,411. This means that with the Pedmoto Series 1 you have a large window in which you can set the variator weights making DIY setup very easy. This also allows the exhaust to be more flexible when used with upgraded cylinders kits operating within a different rev range. 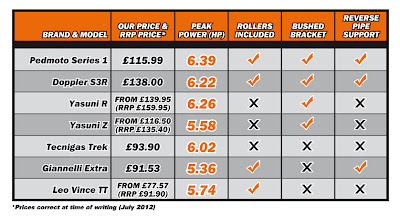 So, which do you choose? Well that’s always going to be your decision but for us it’s clear in both categories. We will be including the Polini Team system into the mix once we have new stock and we’ll follow up on all systems tested in the 70cc shootouts to follow. 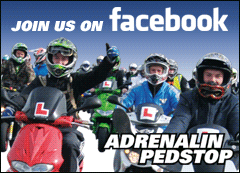